Having started fifth on the grid, Bagnaia dropped to ninth on the opening lap, but rebounded to take the lead on the ninth tour and pull away by over a second to score his second win of the 2022 campaign.

Di Giannantonio was quickly pushed out of the lead, first by Marini at Turn 4 on the opening lap and then Bezzecchi at Turn 11.

Bezzecchi then powered past his GP22-mounted team-mate Marini on the main straight to take the lead at the start of lap two on his 2021-spec Ducati.

For the next eight laps Bezzecchi would run at the front of the pack, while Bagnaia and reigning world champion Quartararo cleverly worked his way towards the podium places on his underpowered Yamaha.

Unable to make any moves on the main straight on his M1, Quartararo carved past the likes of Aprilia’s Aleix Espargaro, Di Giannantonio and Marini at Turn 4, Turn 11 and Turn 6 from laps two to four.

Up to second and defending from a retaliation by Marini into Turn 1 at the start of lap five, Quartararo wouldn’t be able to put his Yamaha into the lead as Bagnaia powered past into Turn 1 on lap six.

The factory Ducati rider proceeded to cut down Bezzecchi’s advantage at the head of the pack and made his decisive move into Turn 1 on lap nine.

Bagnaia quickly put a second between himself and the group behind, which would be led by Quartararo after he defended third again from Marini on lap nine before passing Bezzecchi at Turn 10 on the 11th tour.

Quartararo put daylight between himself and the warring VR46 Ducatis as Aleix Espargaro started to put himself into podium contention in the second half of the 23-lap race.

Though Quartararo would pull a few tenths back on Bagnaia through the twisty sections of the circuit, the power deficit of the Yamaha stopped him from making any real gains on the Italian.

The gap would come down to 0.635 seconds at the chequered flag, but Bagnaia held firm to take victory on home soil as Quartararo extended his championship lead to eight points.

Aleix Espargaro moved into third ahead of Bezzecchi at Turn 10 on lap 17 and pulled away by six tenths to claim a fourth-straight third-place finish to strengthen his position in second in the championship. 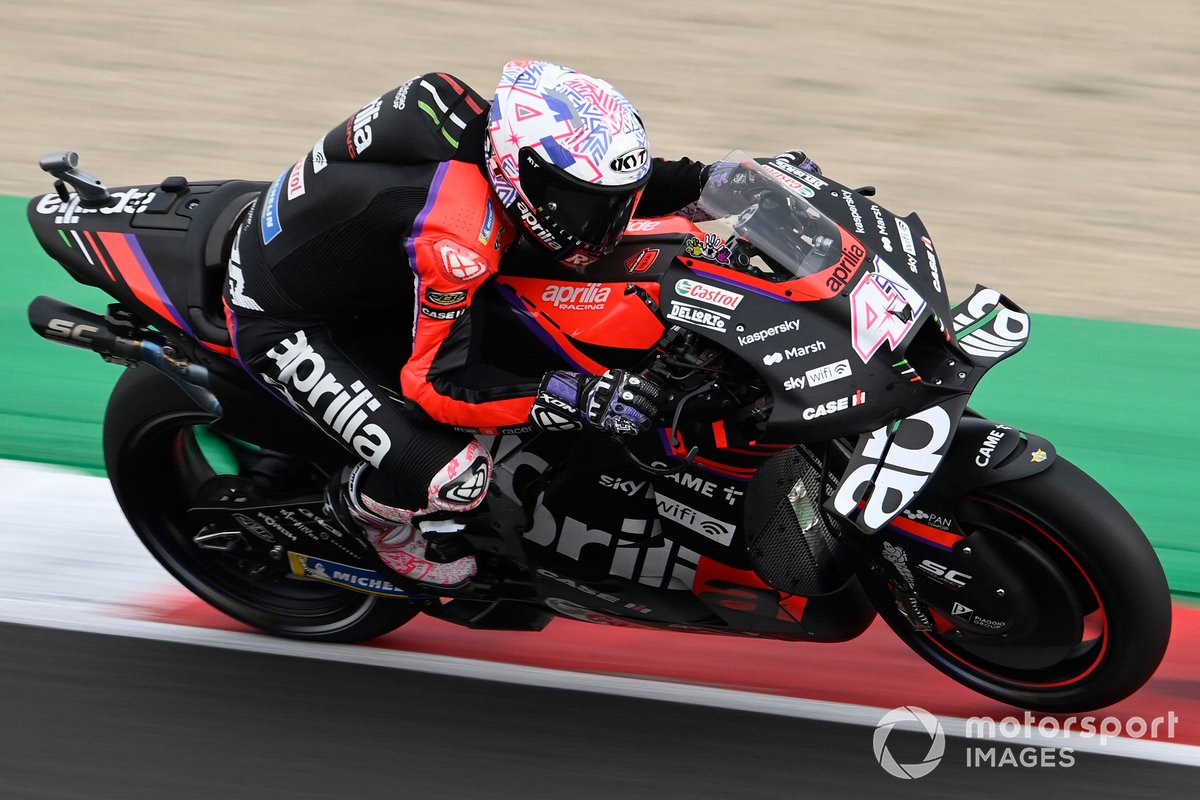 Johann Zarco snatched fourth in the end on his Pramac Ducati from VR46 duo Bezzecchi and Marini on the weekend their mentor and team owner Valentino Rossi had his famous #46 retired from MotoGP.

KTM’s Brad Binder leaped up from 16th on the grid to run seventh by lap two and held that position to the chequered flag ahead of LCR Honda’s Takaaki Nakagami and Miguel Oliveira on the sister factory team KTM.

Completing the top 10 was Marc Marquez on the factory Honda, who announced on Saturday that he would be taking a break from racing after Mugello to have a fourth operation on the right arm he badly broke in 2020.

The six-time world champion is likely to miss the rest of the 2022 campaign, but took a fighting 10th as team-mate Pol Espargaro crashed out.

Di Giannantonio faded to 11th in the end ahead of Aprilia’s Maverick Vinales, who salvaged 12th having qualified 24th. Pramac’s Jorge Martin, LCR’s Alex Marquez and Jack Miller on the second of the factory team Ducatis took the final points.

Le Mans race winner Enea Bastianini’s championship hopes took another knock as he crashed out while running sixth on lap 14.

He joined both Suzuki riders Joan Mir and Alex Rins on the sidelines, as both tumbled out of the race on lap eight.