Despite its favourite status at Mugello this weekend, FP3 got off to a fairly disastrous start for the Italian manufacturer.

In the early stages Gresini rookie Fabio Di Giannantonio ran off into the Turn 1 gravel at the same time VR46’s Marco Bezzecchi did, with the latter crashing.

At the same time factory Ducati rider Jack Miller was forced to stop at Turn 8 with a technical issue, while team-mate Bagnaia crashed at Turn 12 not long after – the Italian’s GP22 smashing its way to land on top of the tyre barrier.

Pramac’s Jorge Martin would also have a crash with just under half an hour of the 45-minute session remaining.

Improvements on the combined order were few and far between for much of FP3, with no headline moves inside the all-important top 10 spots pivotal to securing a direct Q2 qualifying place coming until the final 15 minutes.

Miller was the first rider to go for a soft tyre time attack around halfway through the session, but couldn’t hook a lap together as he continually lost time through the third sector.

Aprilia’s Maverick Vinales would be the first rider to make a significant improvement, as he went to third with a 1m46.121s.

Though he would get back up to ninth after his first soft tyre run, a big mistake going through Turn 8 in the latter stages left the Yamaha rider visibly frustrated having felt on Friday that his form was completely “opposite” to how it was in 2021 when he won at Mugello.

While this was happening, Bagnaia was lighting up the timing screens and produced a 1m45.393s with 11 minutes to go to move almost half a second clear of the field on the combined times.

That lap would see him safely through into Q2 and kept him top of the pile ahead of Friday pacesetter Aleix Espargaro, who improved to a 1m45.669s on his Aprilia.

Luca Marini completed the top three on his VR46 Ducati, with Pramac’s Johann Zarco, VR46’s Bezzecchi, Le Mans race winner Enea Bastianini on the Gresini Ducati – who crashed at the final corner while on his final lap – and Pramac’s Martin following him.

The next non-Ducati was Pol Espargaro on the factory team Honda in eighth ahead of LCR’s Takaaki Nakagami, while Quartararo scraped through to Q2 in 10th by just 0.028s from Vinales.

Neither Suzuki rider could hold onto a place in Q2, with Alex Rins 12th and Mir 16th, while Miller failed to get his factory team Ducati into the top 10 in a disappointing 15th. 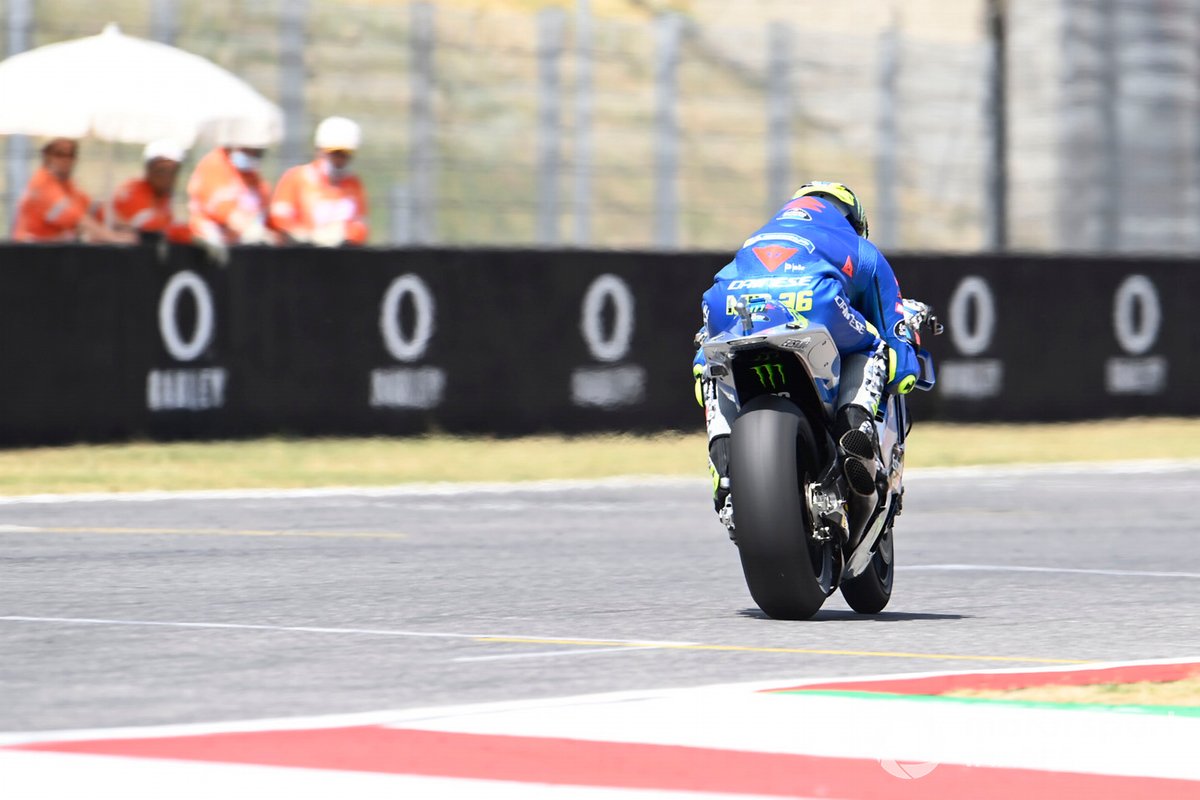 No KTM rider has made it directly into Q2, with Miguel Oliveira the best of them in 14th, while six-time MotoGP world champion Marquez on the sister factory Honda ended the session 1.184s off the pace down in 21st.

RNF Racing rookie Darryn Binder crashed at the last corner just seconds after Bastianini did, with the incident placed under investigation as it may have happened while yellow flags were still showing.