Having only scored one pole before in his entire grand prix career, Di Giannantonio guided his Gresini-run 2021-spec Ducati from Q1 to a maiden pole to lead an Italian 1-2-3 ahead of Valentino Rossi’s duo Marco Bezzecchi and Luca Marini.

Rain appeared not long into the preceding FP4 sessions and meant the first 15-minute shootout session in qualifying started in iffy conditions.

The spots of rain were not falling heavily enough to make the Mugello circuit wet, however all bar Brad Binder still ventured out initially in Q1 on rain tyres.

Binder’s call looked inspired as he went almost three seconds quicker than anybody else on his first flying lap on slicks, forcing the rest of the Q1 runners back to pitlane to switch to dry rubbers.

A brief increase in rain in the second sector made Binder’s timing look impeccable as lighting flashed the skies above Mugello and the skies continued to darken, with the South African bailing into pitlane.

But there was still time out on circuit on slicks, with Binder getting shuffled back as lap times continued to tumble as the session wound down.

It would be Gresini rookie Fabio Di Giannantonio who would come out of the session fastest on a 1m47.219s, from Honda’s Marc Marquez – who shadowed Jack Miller in the closing stages to get his 1m47.294s.

With rain closing in on the circuit, there was a scramble out of pitlane at the start of Q2 as the riders looked to get a lap in just in case of worsening conditions.

But a heavy highside for Marquez at Turn 2 led to a red flag with 13 minutes and 50 seconds on the clock as his Honda erupted into flames and left oil on track.

Marquez was quick to his feet and made it back to his garage, with the session getting back underway 10 minutes later.

Having had prior knowledge of the conditions, Di Giannantonio set the early pace when Q2 got back underway with a 1m49.124s, which he improved over the next few laps to a 1m46.907s.

Marquez came straight back into pitlane after just a few corners on his second bike and would not reappear until the final five minutes.

As the rain stayed away and track conditions continued to improve, top spot would be snatched by several riders over the final few moments.

But it was Di Giannantonio who emerge on top, the Italian firing in a 1m46.156s on his GP21 to lead VR46 duo Bezzecchi on his GP21 and Marini on his GP22 – doing so just hours after Rossi had his famous #46 retired from MotoGP. 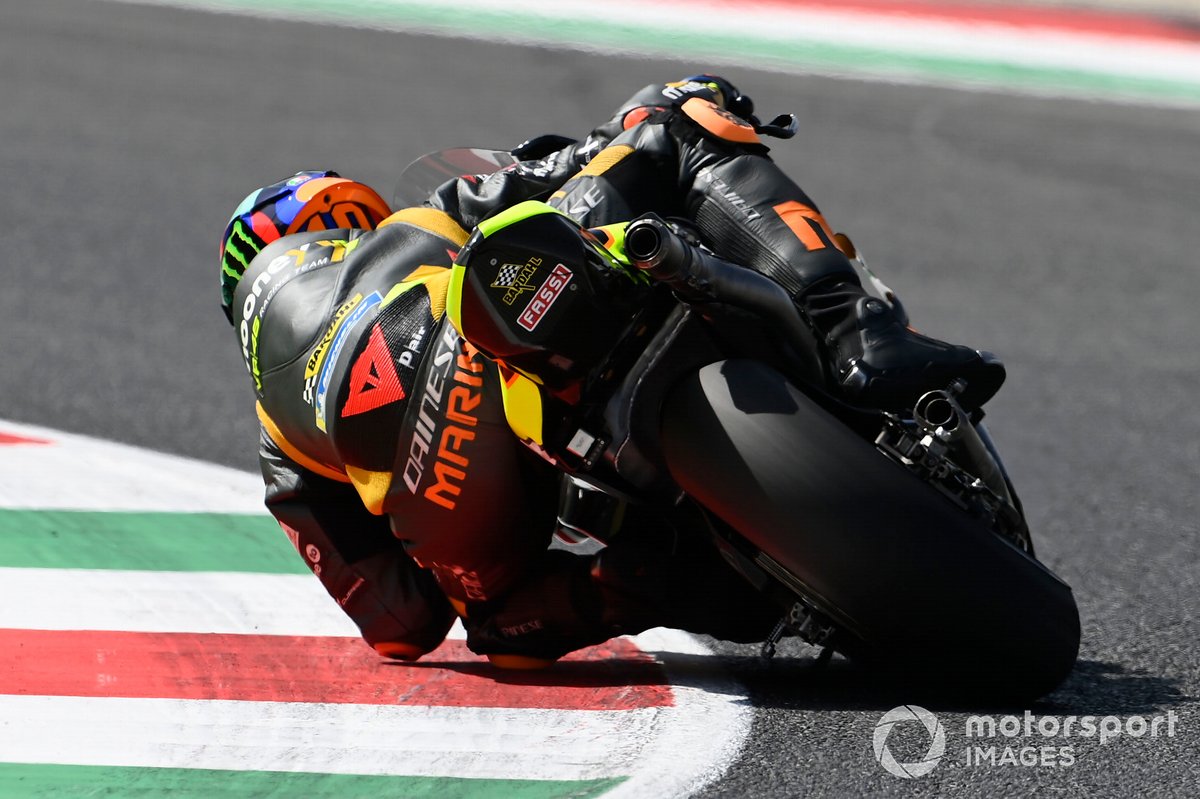 Johann Zarco held top spot briefly in the latter stages, but had to settle for fourth on his Pramac Ducati ahead of FP3 pacesetter Francesco Bagnaia on his factory team Ducati.

Pol Espargaro was ninth on the factory team Honda from Le Mans race winner Enea Bastianini (Gresini), Pramac’s Jorge Martin – who will drop to 13th on the grid having been handed a penalty for impeding in FP3 – and Marquez.

Q1 was littered with big scalps, chief among which was Ducati’s Jack Miller, who was furious to miss out in 13th.

He heads Ducati test rider and wildcard Michele Pirro and KTM duo Miguel Oliveir and Binder, with Joan Mir only managing 17th on the Suzuki.

Team-mate Alex Rins fared much worse on his Suzuki down in 21st behind RNF’s Darryn Binder, who will have to serve a long lap penalty in Sunday’s race after he crashed under yellow flag conditions in FP3.

The conditions of Q1 caught out Yamaha’s Franco Morbidelli, who will have to start 23rd, with Maverick Vinales 24th on his Aprilia.

Razer has added more Barracuda headsets to its line-up