Having put plans in place to return to being a true independent team again in MotoGP for 2022 after partnering with Aprilia’s factory effort since 2015, double 125cc world champion Fausto Gresini died in February last year after a lengthy battle with COVID-19.

With his widow Nadia Padovani taking over as team owner and team principal, Gresini Racing elected to push on with its 2022 plans and partnered with Ducati to field 2021-spec bikes for Bastianini and rookie Fabio Di Giannantonio.

And in emotional scenes, Bastianini took his first win in MotoGP for the Gresini squad in its first race back as an independent team.

Poleman Jorge Martin got a shocking launch off the line and dropped to eighth, as Pol Espargaro got the better of Honda team-mate Marc Marquez to take the lead from sixth on the grid.

Fitted with the soft front and rear Michelin tyre, the factory Honda duo ran one and two in the early stages – Espargaro keeping his six-time world champion at bay when Marquez ran into Turn 1 too hot in his attempt to take the lead on lap two.

Another excursion out wide at Turn 1 allowed KTM’s Brad Binder to come through on Marquez on the sixth tour, with Espargaro’s lead opening up to six tenths.

Further down the order reigning world champion Fabio Quartararo had jumped from 11th to seventh on the underpowered factory Yamaha, but would soon be shuffled back to 10th as the recovering Ducati’s of Pramac’s Martin and Francesco Bagnaia – who was 14th at the end of lap one – came back into the top 10.

Bagnaia’s factory Ducati team-mate Jack Miller similarly dropped through the pack on the opening lap and would end up in dead last before retiring at the end of lap seven with a technical issue.

The nightmare for Ducati continued on lap 12 when Bagnaia crashed trying to overtake Martin at Turn 1 and took the Pramac rider with him.

At the front Pol Espargaro’s pace remained strong and his lead would soon be up to over a second by lap 13, with Binder now holding up the likes of Bastianini and Marc Marquez behind.

Bastianini – who made a late switch to the medium rear tyre from the soft – cleared Binder at Turn 1 at the start of lap 14 and ate into Espargaro’s 1.3s lead over the next few tours.

On lap 19 Bastianini out-dragged Espargaro to take the lead, with the Honda rider’s hopes of fighting back ending at Turn 1 when he ran out wide and let Binder through into second.

Espargaro’s mistake allowed Bastianini to put 1.3s between himself and the rest of the pack, though Binder would come back towards him on the final lap.

But Bastianini would keep it clean to get to the chequered flag 0.346s clear of Binder, while Pol Espargaro gave the radically revised 2022 Honda its first podium in third.

Aleix Espargaro made a late charge for fourth on the factory Aprilia ahead of Marc Marquez, while the Suzuki pair of Joan Mir and Alex Rins didn’t fulfil the promises their strong practice pace showed in Qatar in sixth and seventh. 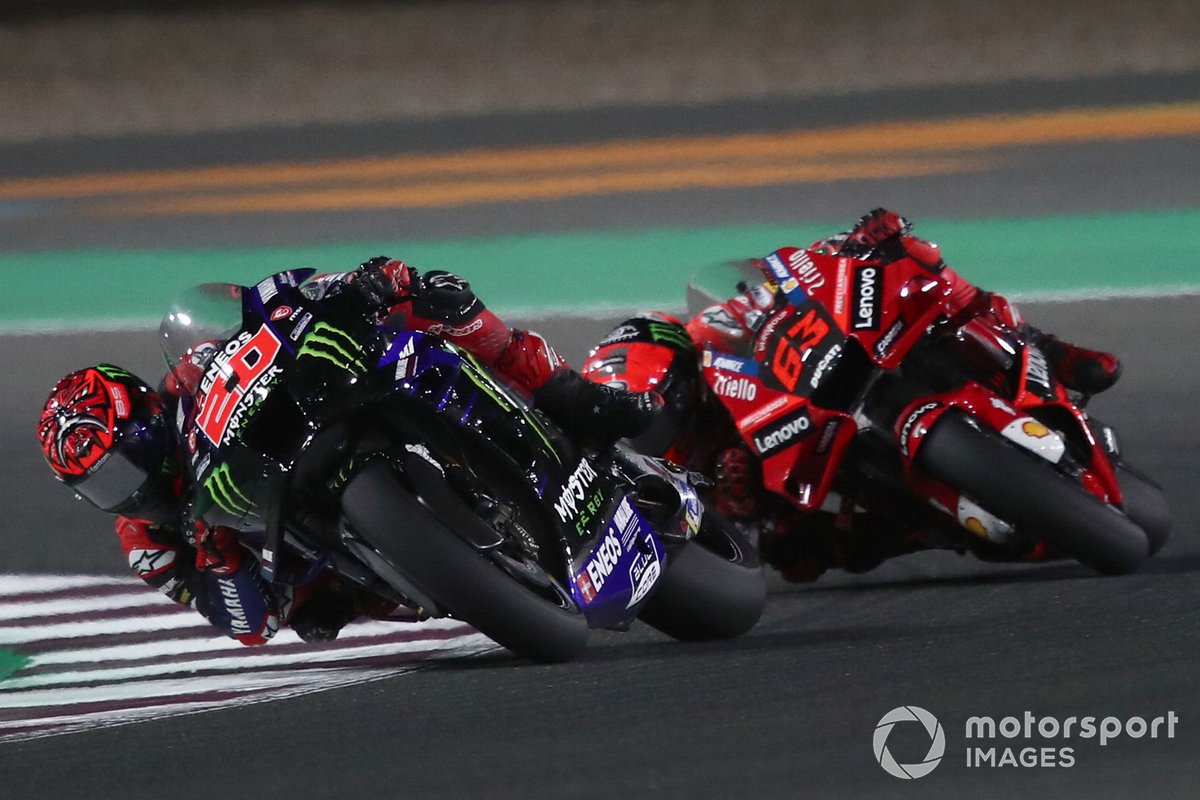 In a humbling start to his title defence, Quartararo was pipped by 0.007s across the line to eighth by Pramac’s Johann Zarco, with LCR Honda’s Takaaki Nakagami rounding out the top 10.

Franco Morbidelli was 11th on the sister factory team Yamaha, with Maverick Vinales recovering from 19th to 12th on his Aprilia ahead of VR46’s Luca Marini, RNF Racing’s Andrea Dovizioso and Tech3 KTM rookie Remy Gardner.

Darryn Binder’s first race straight out of Moto3 ended in a solid 16th from last on the grid on his year-old RNF-run Yamaha, with Gresini’s Di Giannantonio and Raul Fernandez (Tech3) the last of the classified runners.

Manchester United need to pay €80m for Serie A midfielder