To cope with the extreme heat at the new Mandalika track in Indonesia, MotoGP tyre supplier Michelin has brought a carcass that was last raced in Thailand in 2018.

This was in response to tyre problems that appeared during last month’s pre-season test at Mandalika.

But the old tyre design has caused issues for some manufacturers, chiefly Honda, who endured a nightmare qualifying with none of its riders escaping Q1.

Marc Marquez crashed twice and could do no better than 15th – though will start 14th after a penalty for Franco Morbidelli – while Espargaro was 16th.

The latter expressed frustration at the situation, feeling how it has negatively affected Honda is “unfair” given it built “the best bike” on the grid around the normal 2022 tyres.

“Honda during all the winter, even last year, was taking a lot of information on the tyres, even here we were working a lot to recognise the problems of the bike,” he said.

“They bring a new bike to Jerez, to Malaysia that fits perfectly to the current tyres.

“Then there was some problems during the [Indonesia] test and to improve the problem Michelin brought a four-year-old tyre.

“So, what we face is we have the best bike on the grid with the current tyres, with the normal tyres.

“But with the four-year-old tyres, this bike is not made for it.

“We saw Ducatis struggling a lot here in the test, they were super slow, especially on rhythm, but now they are flying.

“We are especially pissed off with that, because we were fast and we think it is unfair in some ways because we were working so much during the pre-season with a new bike and I think Honda did an amazing job and we do not deserve these results.”

Such have been the severity of the rear grip problems Espargaro has had on the old tyre design, he fears he may not be able to finish Sunday’s race due to the stress now being put on the front tyre.

“I mean, it’s funny because we had problems on the test with the tyres because of temperature, but we have problems now to finish the race with the tyres,” he added.

“We have huge problems with the front tyre which we don’t know what to do [about] because maybe we will not finish the race.

“Now we have a huge problem on the front tyre that maybe we will not race.

“As the rear is not working enough, it’s not making the bike turn, so we are asking so much on the front tyre, we generate a huge temperature, we destroy the front tyres.

“So, it’s a problem that comes from the rear.” 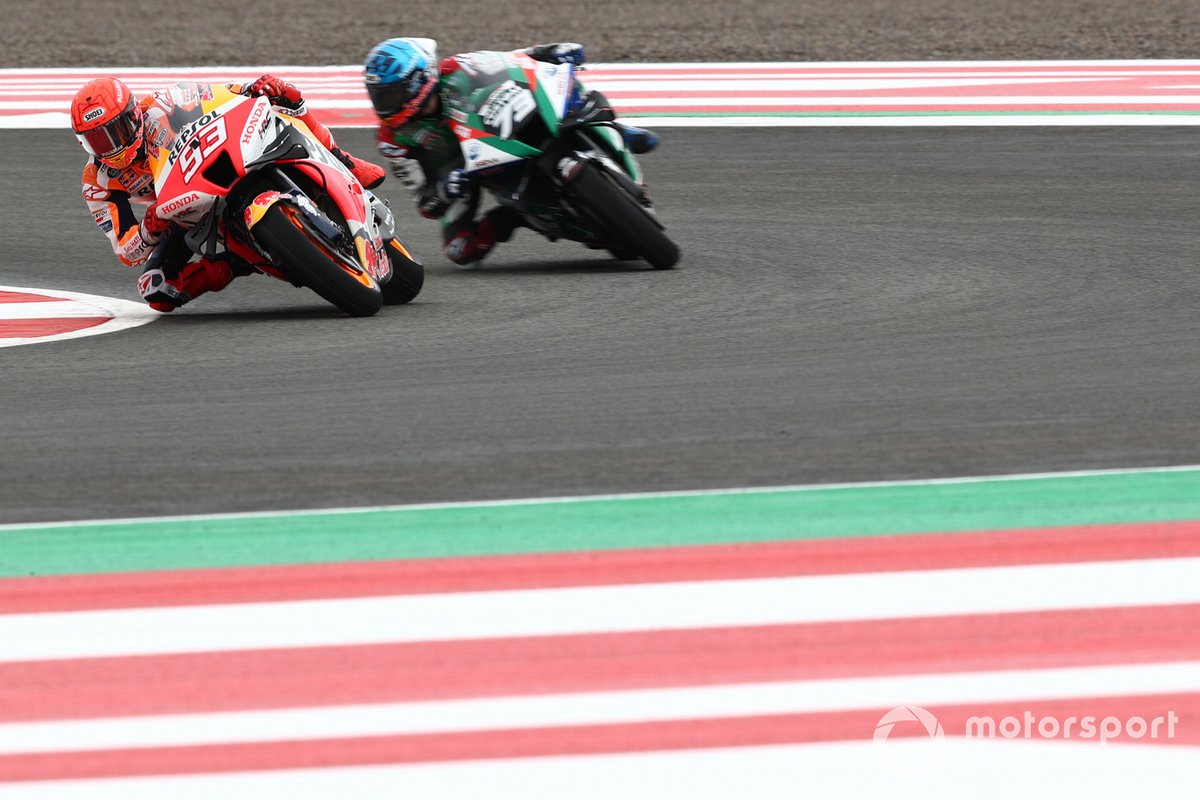 Team-mate Marc Marquez had numerous moments during Q1 before both crashes and admits the problems Honda riders have faced with the alternate rear tyre design have been “unexpected”, given Espargaro topped the Mandalika test in February.

Looking ahead to his charge from 14th on the grid, Marquez admits he will have to “attack” from the off and hope his tyres hang on at the end of the race.

“I cannot have the same patience [as I did in Qatar] tomorrow,” Marquez noted. “I need to attack. In the laps when I will attack I will take a risk.

“And then we will see if it’s too much or not, but I need to take a risk to minimum finish in the top 10.

“But if you want to finish in the top you need to take a risk – I’m not saying fighting for the victory or the podium, you have to forget this starting from 14th.

“But you cannot be patient like Qatar because you need to attack and you need to pass riders.”