Friday’s running at Le Mans was held in bright and warm conditions across both sessions, with Gresini’s Enea Bastianini beating the outright lap record in FP2 to end the day fastest. But across both sessions there were 14 crashes at various points of the track.

Le Mans is known for being the circuit with the highest crash rate in years gone by, with an infamous dry Friday in 2018 featuring 109 tumbles across all three classes. But conditions at Le Mans are typically cold, which made Friday’s spills seem unusual from the outside.

KTM’s Miguel Oliveira, who fell twice in FP1, says he had no answer for why there were so many crashes and felt like the track was “sensitive” in how it offered grip.

“I cannot really say for sure, but it feels like you have good grip, good temperature,” Oliveira said when asked by Autosport for an explanation of Friday’s crashes.

“But all of a sudden you either lose the front or lose the rear. So, somehow the track is sensitive.

“For example, most of them [a few years ago] were Turn 2 because of the left cold side. But today we’ve seen a lot of crashes in a lot of places, I don’t know.”

Ducati’s Jack Miller offered a similar comment, after the 2021 French GP winner had a “strange” crash at Turn 11 this afternoon.

“Real strange one to be honest,” Miller said of the fall.

KTM rider Oliveira fell twice on Friday, and cited that the track was “sensitive”

“Just started forcing the tyre in the middle of the corner and both sort of let go on me. The grip didn’t feel all that bad but when it let go, it let go really quickly like we saw with a lot of guys – no explanation.

“Like I said, the grip feels good till it doesn’t. It feels not bad and then all of a sudden she’s gone, it’s a strange situation.

“I don’t know because the medium tyre felt pretty good, and the rear’s lasting well and the front is not locking or anything like that.

“But then you try to force it a little bit more on the edge and it seems to give out. I didn’t really [get] any warning of crashing.

“Of course, I knew I was pushing in there a few times on the lead up to it. But if you’re talking about a corner where you should be able to push the bike and have a bit of margin it’s there, because you’ve got a lot of banking, you’re pretty central on the bike.

“It should be a good corner to have a good feeling, but it just let go really, really quick. It shocks you a bit, but even putting in the soft if made a little bit of a difference but not much.”

Miller’s Ducati team-mate Francesco Bagnaia also conceded the feeling on track was odd, especially given how fast the lap times on Friday were.

“It’s strange the feeling with the grip because thinking on the grip, it’s incredible the lap times we are doing because we are so much faster than the last years without grip because you feel that there’s something strange,” Bagnaia said. 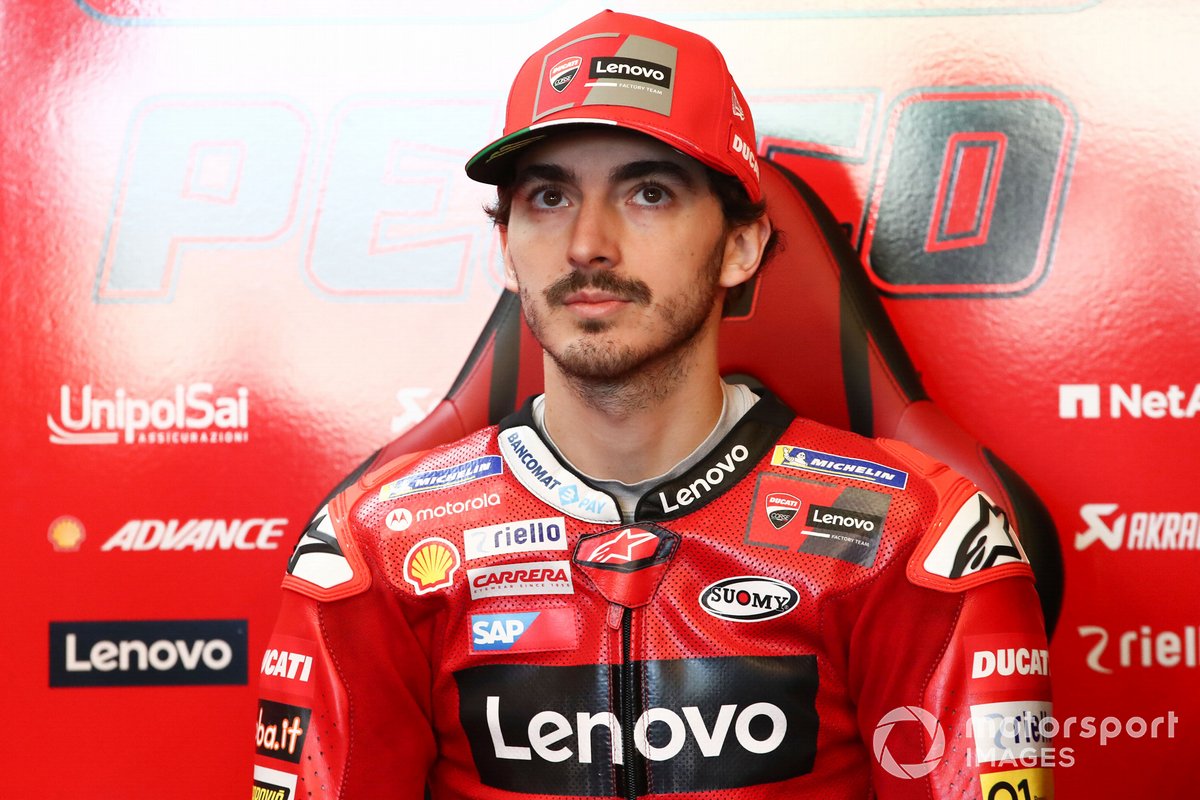 Bagnaia said his feeling on the factory Ducati was “strange”

“This morning I thought it was like this because it was the morning, but this afternoon was even worse. I don’t understand why.”

But Suzuki’s Joan Mir, who fell at Turn 7 in FP2, believes the crashes on Friday at Le Mans were just a consequence of the nature of the track and the cold wind of FP1 may have “created some confusion”.

“This track has this characteristic I think,” said Mir.

“The crashes normally, if we don’t talk about the slow corners, all the rest of the corners there’s not a lot of warning from the front tyre.

“There’s a lot of crashes, all without warnings. This is typical of Le Mans.

“We also know that here there is a lot of crashes, because today the temperature was high but the wind was cold. So this can also create some confusion.”