Quartararo hadn’t won a race since Silverstone 2021 last August, but surmounted early leader Joan Mir on the fourth lap and romped to a crucial first win of a so far difficult season.

Mir streaked away off the line from second on the grid to lead a race for the first time since his title-winning season in 2020, while Quartararo leaped from fifth to third.

Between the two champions was Pramac poleman Johann Zarco, but Quartararo mugged second off of him into the Turn 3 right-hander as Mir pulled around six tenths clear at the front.

Zarco was briefly shoved back to fifth by factory Ducati counterpart Jack Miller and the LCR Honda of Alex Marquez – though Zarco quickly got back into the podium places by the end of the second tour.

Quartararo ate into Mir’s lead on the second lap and was soon within striking distance, with the Yamaha rider making his move into Turn 1 on the fourth tour having nailed his run out of the sweeping downhill final corner and taken profit of the Suzuki’s tow.

Immediately Quartararo opened up a lead of close to a second and would continue to extend that as Mir dropped back into the clutches of Zarco.

Zarco would make a failed attempt at taking second from Mir at the start of lap 16, the Pramac rider running wide at the first corner.

But he made the pass stick next time around, with Mir now forced to fend of Miller for the final podium place.

Miller would get a run on Mir into the first corner as they started lap 19 of 25, but would lose the front of his Ducati under braking and wipe out the Suzuki rider.

This promoted Aprilia’s Aleix Espargaro up to third, with the Argentina winner embroiled early on in a battle with Alex Marquez, KTM’s Miguel Oliveira and a hard-charging Alex Rins on the sister factory Suzuki.

Rins qualified down in 23rd after making a strategy error in the wet-to-dry Q1 session, but on the opening lap rocketed to 11th and marched his way through the bottom half of the top 10.

On lap eight Rins picked Oliveira’s pocket at Turn 10 and went around the outside of Alex Marquez at Turn 10 to move into fifth.

At the front, Quartararo controlled the pace and managed to move over six seconds clear of Zarco at one stage as he went untroubled to the chequered flag to claim the first victory of his title defence. 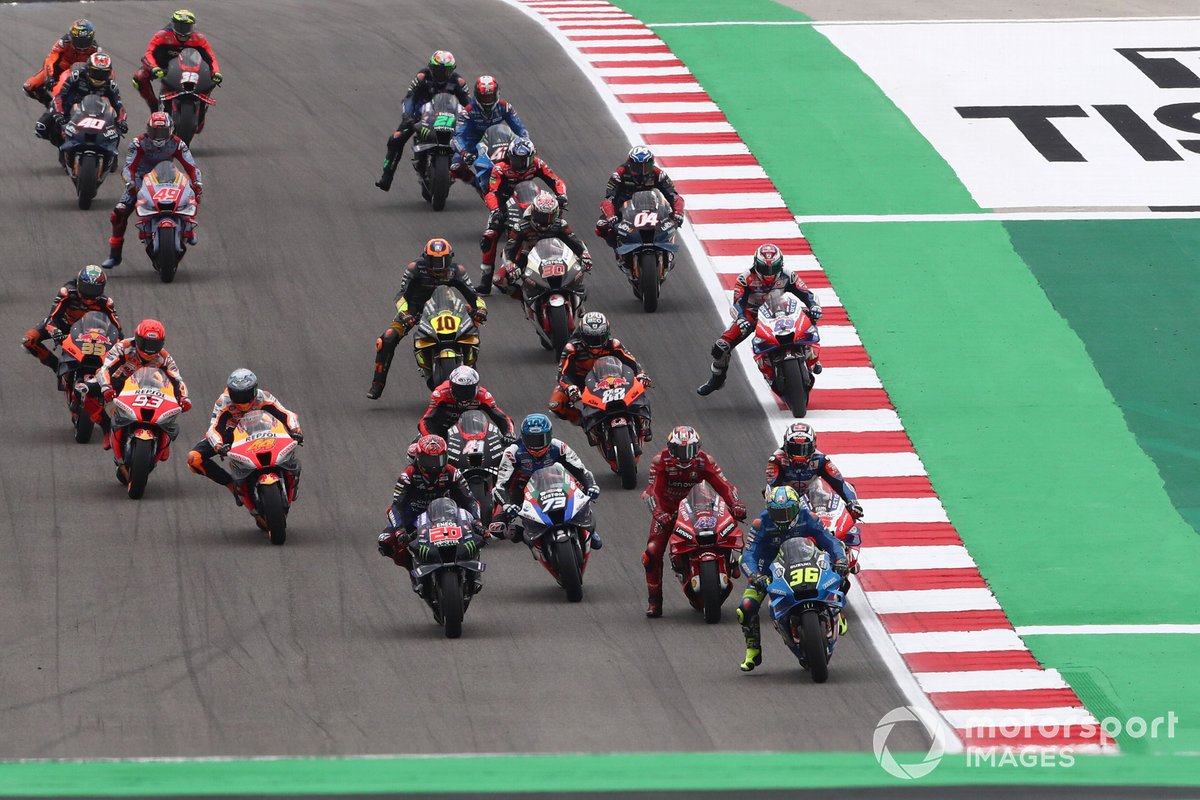 Zarco would come under threat from Aleix Espargaro over the final laps, but held firm to score his second podium of 2022 ahead of the Aprilia rider.

Rins’ incredible salvage job took him to fourth and puts him equal on points with Quartararo at the top of the standings (though the latter leads by virtue of his victory).

Both riders have launched eight points clear of erstwhile championship leader Bastianini crashed on the 10th lap having been battling at the fringes of the top 10.

Marc Marquez beat his LCR Honda-mounted brother Alex Marquez by 0.020s across the line after the pair engaged in a heated battle for sixth in the closing stages.

The six-time world champion had a similarly tight battle with team-mate Pol Espargaro in the early stages, but came out on top, while the latter was shuffled back to ninth behind Francesco Bagnaia on the Ducati – the pair making contact on the final lap at Turn 9.

Bagnaia was cleared to race this morning after a heavy crash in qualifying left him last on the grid.

A crash for Takaaki Nakagami left him in 16th ahead of RNF rookie Darryn Binder, while Aprilia wildcard Lorenzo Savadori, Gresini’s Fabio Di Giannantonio and Pramac’s Jorge Martin all failed to make the chequered flag.

Can Eating More Speed Up Your Metabolism? 10 Foods to Boost BMR