After a miserable start to his title defence in Qatar, in which he qualified 11th and finished the race ninth, Quartararo stormed to his first pole since the 2021 Catalan GP by 0.213 seconds from Pramac’s Jorge Martin.

Qualifying was delayed by 20 minutes after the preceding FP4 session was red-flagged for Alex Rins’ Suzuki catching fire at Turn 13.

Having come through a dramatic Q1 session, Francesco Bagnaia put his factory Ducati top of Q2 in the opening stages with a 1m31.615s.

But this was quickly demolished by reigning world champion Quartararo, who put his Yamaha top of the pile with a 1m31.227s just moments after team-mate Franco Morbidelli – who was fastest in the preceding FP4 – crashed at Turn 5.

At the start of his second run, Quartararo found more time to a 1m31.067s and would go unchallenged through to the chequered flag to open his pole account in 2022.

He will head the two Pramac Ducatis of Martin and Johann Zarco, who leaped up to third late on.

With KTM’s Brad Binder and Qatar race winner Enea Bastianini on the Gresini Ducati making late gains up to fourth and fifth also, Bagnaia found himself shuffled off the front row to sixth.

Miguel Oliveira on the sister factory KTM was seventh ahead of Rins, while Jack Miller could do no more than ninth on his factory Ducati.

Aleix Espargaro will start 10th after crashing his Aprilia late on while on a strong lap. He will start alongside Gresini rookie Fabio Di Giannantonio – who followed Bagnaia through Q1 – and Morbidelli.

The shock of qualifying came in a dramatic Q1, as three main hitters in Honda duo Marc Marquez and Pol Espargaro, and Suzuki’s Joan Mir failed to get out of the session.

The change of rear tyre casing to a stiffer design to cope with Indonesia’s extreme heat looks to be affecting the likes of Honda and Suzuki more than others, with Q1 proving a massively scrappy outing for both Marquez and Espargaro.

Marquez elected for a two-stop strategy in qualifying, but crashed at Turn 13 on his first bike.

Though he made it back to pitlane to get his second RC213V, on his final lap the six-time world champion crashed again at Turn 12 and was left in 15th as a result. 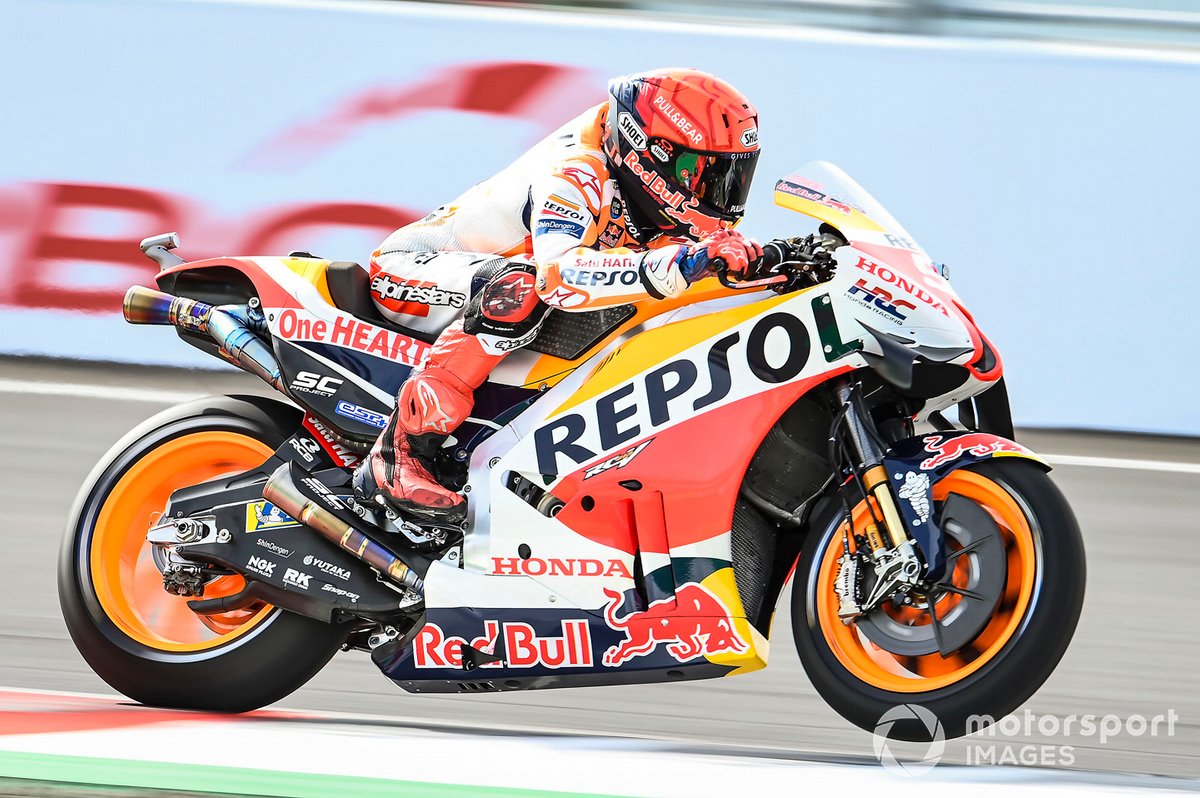 Just seconds after Marquez’s second spill, a struggling Mir also took a tumble and resigned himself to 18th on the grid – his worst qualifying since last year’s Emilia Romagna GP.

Pol Espargaro – who topped the first practice on Friday and came into the Indonesia weekend having been fastest in the Mandalika pre-season test – fared no better after several lurid moments.

He will start 16th, 0.001s behind Marquez, with VR46 Ducati duo Marco Bezzecchi – who also had a late Q1 crash – and Luca Marini ahead of them.