Motorsport history is full of iconic moves that raised questions at the time but ultimately proved to be major coups for a marque. Michael Schumacher’s switch to Ferrari in 1996 as the Italian brand’s Formula 1 title drought stood at 15 years and Lewis Hamilton’s switch to an inconsistently competitive Mercedes in 2013 – one year ahead of the hybrid switch that helped to propel him into F1 legend – are among those that spring to mind.

The motorcycling equivalent came in 2003, when Yamaha managed to convince Honda’s Valentino Rossi to join it for the 2004 MotoGP season. In the fullness of time, history reflects brilliantly on the Rossi/Yamaha partnership – a 16-season collaboration, split into two parts (2004 to 2010 and 2013 to 2021), which yielded four world titles for the Italian and 56 grand prix victories in all.

But at the time, it was a move deemed extremely risky for Rossi, who was already a three-time world champion in the premier class. He’d won the final 500cc crown in 2001 and taken the first two titles of the new four-stroke MotoGP era over the following two seasons on the all-conquering RC211V.

In 2003, Yamaha didn’t win a single race. It’s only podium came courtesy of Alex Barros on the Tech3-run M1, while the highest placed factory team Yamaha rider in the championship was Carlos Checa in seventh. He was a full 234 points behind of Rossi, who won nine times on his way to title number three.

But disillusionment had enveloped Rossi and Honda, as HRC placed more pride on the RC211V for the success Rossi was enjoying – while the Italian felt undervalued. This opened a door for Yamaha to try and court MotoGP’s biggest star.

Rossi and Honda were a dominant combination in 2003, but Brivio convinced him that his future lay with Yamaha

The key figure responsible for this was Davide Brivio, then team manager for the factory Yamaha squad. First linked with Yamaha when he started working in World Superbikes in 1990, Brivio joined the marque in MotoGP in 2001. Now at the centre of its biggest coup, Brivio came up against a problem, as he revealed in a recent interview with Autosport’s Spanish language sister site Motorsport.es.

“At first, Yamaha didn’t want to sign Rossi,” explains Brivio, who is now working at Alpine’s F1 team. “There was a trend that said that if he won, everyone would think that he won, that it would only be his merit. And if he didn’t win, the focus would be on the bike.

“Who changed that thinking was Masao Furusawa, who in [June] 2003 became the leader of the project. He was the one who convinced the Yamaha president that Valentino had to be signed. Together we convinced the top management that, in order to win, it was essential to have a top rider. Honda won, yes, but they won with the best: [Mick] Doohan, Rossi.”

The U-turn in Yamaha’s senior Japanese management would prove pivotal in ultimately ending its MotoGP dry spell. But the deal still had to be done, and that fell to the likes of Brivio and Lin Jarvis.

“We unzipped the tent, went inside, sat around a table and started the meeting. Suddenly, we heard a motorbike approaching, and both myself and Lin hid under the table” Davide Brivio

The MotoGP paddock is awash with secret meetings for the media to sniff out, but Yamaha’s courtship of Rossi was remarkably covert. Brivio revealed negotiations were constant with Rossi during grand prix weekends that year, but the lengths Yamaha management had to go to in a bid to keep their dealings private bordered on the extreme – one particular incident resulting in Brivio hiding under a table…

“During the 2003 world championship we met with Vale almost every race weekend to talk about a lot of things: about the formation of the team, which mechanics he wanted to take, how to deal with testing and so on,” Brivio says. “The problem was where we met, because in the paddock you are in full view of everyone, and in the hotels we are all mixed up.

“One of the strangest episodes was the one at the Clinica Mobile in Brno. We met there after ten o’clock at night, when all the physiotherapists and doctors had already left. We unzipped the tent, went inside, sat around a table and started the meeting. Suddenly, we heard a motorbike approaching, and both myself and Lin hid under the table.” 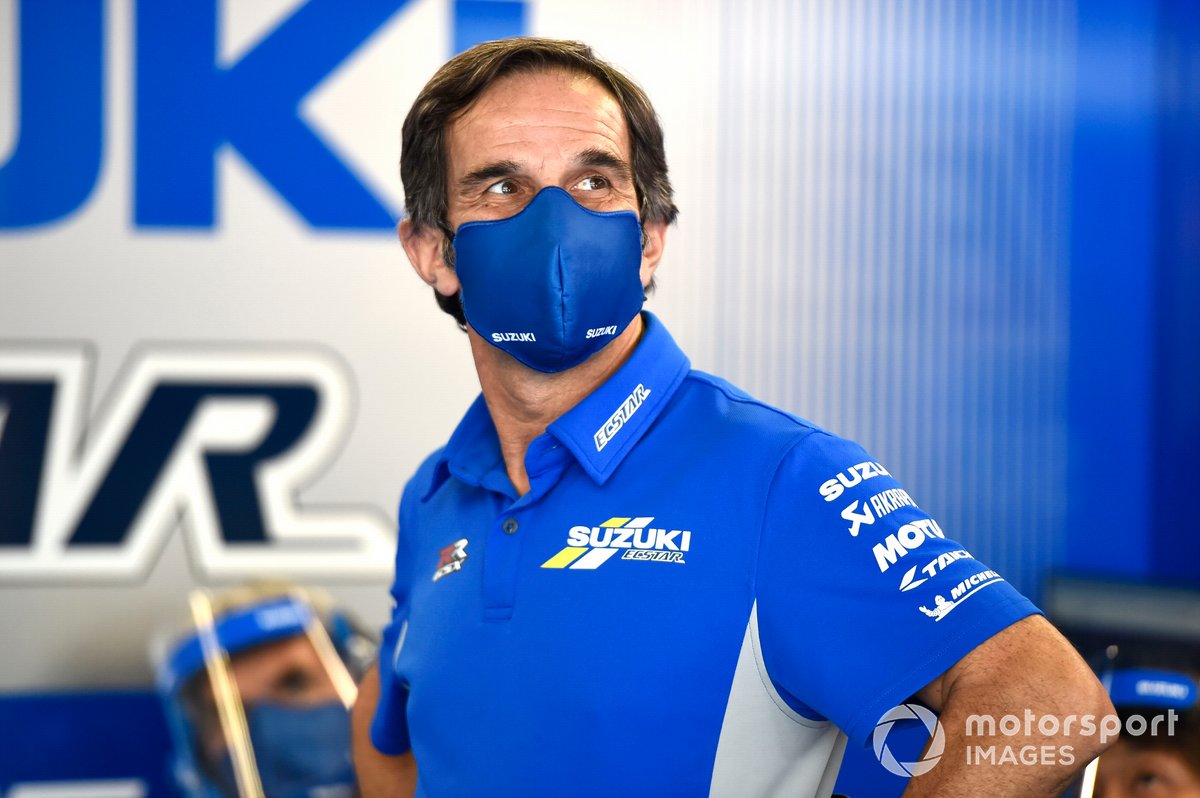 Brivio, who later achieved success with Joan Mir and Suzuki in 2020, first had to convince the Yamaha hierarchy that it would get a share of the credit for Rossi’s successes

Rossi’s then-manager Gibo Badioli made heavy demands for Yamaha to secure his man’s signature – his financial terms “disproportionate at first”, according to Brivio. But a deal would eventually be reached and Rossi sent the media into a frenzy with news of his move to Yamaha for 2004. Though the big secret was out, that didn’t stop Yamaha from continuing its cloak-and-dagger operations with the Italian in 2003.

“After we shook hands, the moment came when Vale wanted to see the bike,” Brivio recalls. “It was at Donington Park circuit. We waited until the early hours of the morning, because we wanted the paddock to be clear. And he came in hooded so he wouldn’t be recognised.”

Honda didn’t make Rossi’s exit at the end of 2003 easy for him, holding him to his contract through to its official termination date and thus halting him from doing any testing of the M1 until the new year. But with his famed crew chief Jeremy Burgess – who’d also helped Doohan to his five-successive 500cc titles with Honda from 1994-1998 – in tow, nothing could stop Yamaha’s long-awaited return to the top in 2004.

After a race-long scrap with arch-rival Biaggi – now on a Honda – in the opening round in South Africa, Rossi began life with Yamaha with a victory. It was the first of nine wins that would secure him his fourth premier class title. Another would follow in 2005, with his final two in 2008 and 2009.

After his disastrous two-year spell with Ducati ended in 2012, Rossi returned to Yamaha for 2013. Winning 10 more races in that period and finishing runner-up in the championship for three years in a row between 2014 and 2016, Rossi saw out his career in MotoGP as a Yamaha rider – albeit with Petronas SRT – in 2021.

Brivio found further MotoGP success with Suzuki, whom he joined in 2013 ahead of its return to the premier class in 2015. In a reverse of the tactic which returned Yamaha to championship-winning ways, Brivio focused on young talent, plucking the likes of Maverick Vinales, Alex Rins and Joan Mir out of Moto2. With the latter, Suzuki’s 20-year title drought was ended in 2020.

While Rossi is the one celebrated as a Yamaha legend, much of that success is owed to Brivio and the often furtive lengths he went to in 2003 to get the number 46 onboard in the first place. 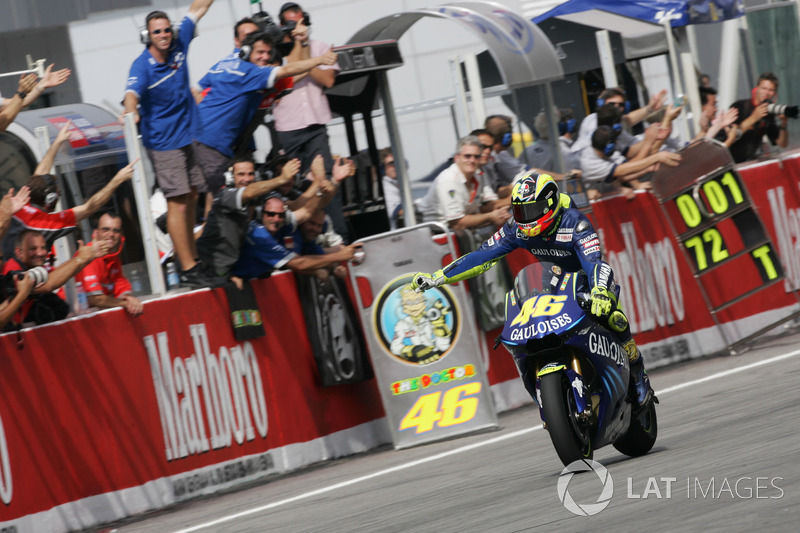