The first 15-minute segment of qualifying started off with the best laps coming on wets before a crossover point materialised where slicks were the best option.

And throughout Q2 the fight for pole was dictated by track evolution, with Pramac Ducati’s Zarco setting the pole lap on his final lap with a 1m42.003s.

Qualifying started in chaotic fashion in Q1 as the track had dried out enough for some to gamble on slicks, but wet patches remained.

LCR Honda’s Takaaki Nakagami was one of the first to venture out on slicks, but immediately bailed for wet tyres at the end of his out-lap.

Tech3’s Remy Gardner also went out on slicks but crashed at Turn 9, while Ducati’s Bagnaia was flicked from his slick-shod bike at the first corner as he started a flying lap.

Bagnaia – winner and poleman at Portimao in November – landed heavily and pointed towards his right shoulder to trackside medical staff, with the Italian being put into the back of an ambulance to be taken for checks.

Ducati confirmed Bagnaia’s initial checks at the medical centre revealed no fractures, but has been transferred to a local hospital for further examination.

Slicks would eventually become the tyre to be on as Q1 drew to a close, with Alex Marquez on the LCR Honda and VR46 Ducati’s Luca Marini using soft rubber to get through to Q2.

Championship leader Enea Bastianini also switched to slicks for his final run and suffered a similarly heavy crash to his Ducati counterpart Bagnaia – the Gresini rider coming off at Turn 5.

This left 2022’s only repeat winner 18th on the grid, while Bagnaia will start last if he is cleared to race having not even set a lap time.

Adding to the list of major Q1 casualties, Pramac’s Jorge Martin’s run of top two qualifying results in 2022 came to an end when he was shuffled back to 13th while Suzuki’s Alex Rins was left in 23rd having stayed on wets at the end of the session.

For the start of Q2, everyone headed out on slick tyres, though conditions were still tricky – with reigning world champion Fabio Quartararo almost losing the rear of his Yamaha on the way into the Turn 7 right-hander.

Alex Marquez used his Q1 slick knowledge to streak clear early on in Q2 with a 1m45.654s, though would soon be overhauled by Suzuki’s Joan Mir with a 1m45.414s.

Mir’s run at the top was short-lived, as Alex Marquez once again took control with a 1m43.211s before Zarco made his first appearance heading the timesheets with a 1m43.151s. 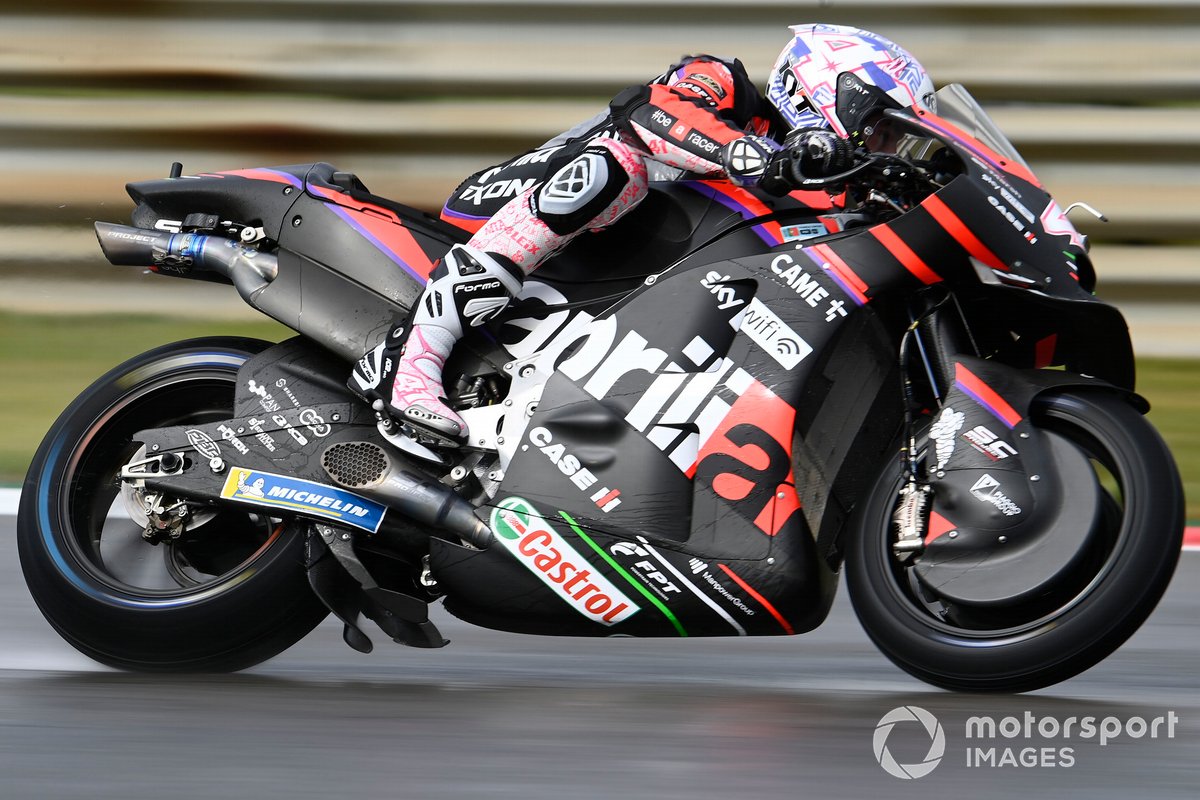 Zarco set this lap with around four minutes still to run, with Quartararo shadowing him by 0.006s.

Mir made another attempt at pole moments later with a 1m43.055s, but was demoted first by Zarco, and then by Jack Miller on the sole factory team Ducati in Q2.

Miller’s benchmark of 1m42.503s looked to have been perfectly timed as yellow flags were brought out in the last sector in the final 20s when Pol Espargaro fell off his Honda.

This proved disastrous for his Honda team-mate Marc Marquez, who did post a session-topping lap of 1m42.295s but had it stripped from him as a result of the yellow flags.

By the time Espargaro’s bike was cleared from the exit of Turn 15, several riders were lighting up the timing screens through the opening sectors of the track.

Mir was first across the line and went top with a 1m42.198s, but was denied a first MotoGP pole by Zarco – who went 0.195s quicker aboard his Pramac Ducati.

Aprilia’s Aleix Espargaro leaped up to third late on to join Zarco and Mir on the front row, with Miller shuffled back to fourth.

Quartararo put his Yamaha in the middle of row two in fifth having also had a front row lap cancelled because of yellow flags ahead of VR46 rookie Marco Bezzecchi on his 2021-spec Ducati.

Alex Marquez crashed at the end of Q2 but will start seventh ahead of the sister VR46 Ducati of Luca Marini, while his brother Marc Marquez will start ninth ahead of Pol Espargaro.

The top 12 was completed by the factory KTM duo of home hero Miguel Oliveira and Brad Binder.

The fifth row will be formed by Martin, Aprilia’s Maverick Vinales and Gresini’s Fabio Di Giannantonio, while Takaaki Nakagami was 17th after backing out of his slick run in Q1.

Behind Bastianini was the sister factory team Yamaha of Franco Morbidelli, with Gardner 20th after his crash ahead of Aprilia wildcard Lorenzo Savadori and RNF Racing’s Darryn Binder.

Tech3 rookie Raul Fernandez also had a crash late on in Q1 and was resigned to 24th between Rins and Bagnaia.